Idili Traditional Guest House, located in the coastal village of Panormo, in the Prefecture of Rethymnon, is an imposing stone-built traditional landmark, a historically preserved building with large, impressive verandas and a majestic garden.

Just 100m. away from the beach and 80m. from the village center where all the traditional taverns and stores are situated, the guest house was reconstructed a few years ago, retaining its Venetian and Cretan architectural features, such as the rooms and chambers, the archways and the stone walls, intact.

The History Of The Building


The historic building that houses the Idili Traditional Guest House was built at a time when Panormo experienced a great development due to its harbor, which was the export center for agricultural products to other Mediterranean ports.

Nowadays, the building is a significant monument of the history and culture of the region, since its architectural features reveal its distinctive character, as well as its functionality in different periods of time.
In the first decades following its construction, the building housed the District Court of Panormo, which was the seat of the Municipality, while between 1904 and 1912, when the region -that was called Kastelli at the time- was at its peak, it was run as an inn.

Over the post-war period, when the first professionals came to the settlement, the building turned into a carpentry, while in modern times it was the residence of those people who preferred to move from the mainland of the province to the coastal settlement that still retained its past glory. In the late 20th century, the building became property of the current owner’s family.

It was declared a landmark by the Ministry of Environment & Energy and was designated a Typical Folk House in the traditional core of Panormo settlement in the Municipality of Mylopotamos. It was renovated in 2004 and started its operation as a guest house in April 2005 under the name Idili Traditional Guest House.

It was divided into three apartments, with each one retaining the architectural features of the building and its influence from the Venetian and Cretan architecture (arches, chambers, wooden ceilings, fireplaces, wine presses, balcony holders) intact. 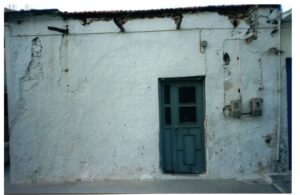 Honeysuckle Traditional House is located on the ground floor of the guest house. It is an independent apartment with a living room, kitchen and one bedroom.

Jasmine Traditional House, a two-level maisonette, is located on the first floor of the guest house.

Hyacinth Traditional House, a two-level maisonette, is located on the first floor of the guest house.